I’ve been making macaron towers for 3 years now, but until this month, all I offered to clients was the classic cone-shaped tower with 120 mouth-watering macarons in 3 flavors. 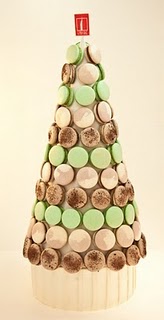 I’ve come to realize though, that with only one tower to offer, my clients are limited to what I have. Some have asked for a bigger tower, others a smaller one, many have inquired about different shapes, and others want a different spin on the traditional wedding cake. 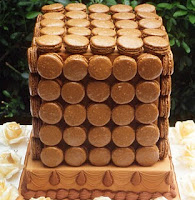 After finding lots of inspiration on the internet, and being most especially smitten by Laduree’s cube of macarons, I finally mustered up my courage to try something new with my tower.

It took a few days to prepare all the materials I needed and conceptualize the shoot. Thanks to this blog, I’ve gotten the hang of using G’s camera, and I don’t have to pull him out of his man cave/workshop on weekends when I want something photographed. 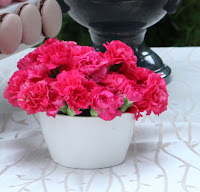 The best part about this shoot was having to go to Laong Laan (or Dangwa, as some would call it). It’s a short drive from where I live and is where flowers from Baguio are dropped off (or so they say. I don’t know who “they” are, though). I love this place! The flowers are so beautifully cheap. I found a bunch of hydrangeas (take that, Madonna!) and fuschia carnations at a bargain.

On the way back home, I stopped by the supermarket to look for pretty candy, and found these white chocolate-covered almonds. 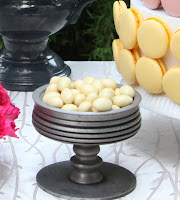 {which I promptly ate after the shoot.} 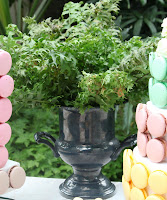 This bronze vase and candy holder are both from my grandmother. According to my mom, the candy holder is made from the material they used to make vintage bombs! My grandfather was in the Air Force, which explains why we have such things in our possession. The large silver “vase” is a champagne chiller, and the fern are from the garden. G does not understand why I use it as a vase, but I think it’s so Shabby Chic, and we never use it for chilling anything anyway.

Presenting the Cube and the Tiered Towers! 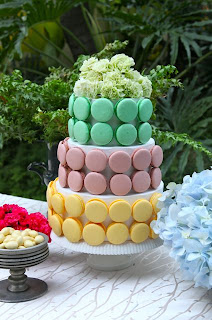 This Tiered Tower holds about 80 macarons, the perfect size for a small gathering. This will be a great addition to the bridal/baby shower buffet, or a centerpiece in a fab Christmas party with friends. 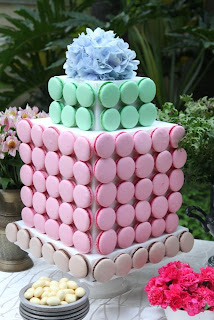 As soon as I placed the final piece on this Cube Tower, it immediately took my breath away. I mean, I know it isn’t in good taste to brag, but I really didn’t expect it to look so wonderfully lovely.

To know more, please visit my Empire site www.empiremacaron.com
Posted by George Rocha-Chu at 1:15 AM